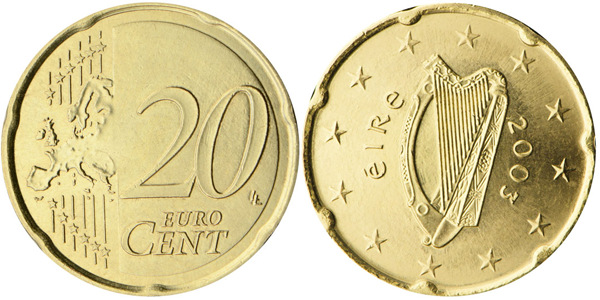 A little background about the 20 Cent coin, The 20 Cent coin was part of the Euro Circulation coin series of Ireland. Produced between the years 2007 – 2014 at the Currency Centre, Dublin, Ireland mint. In total 34,167,931 20 Cent coins were produced.

The standard globally for identifying coins is the KM Code. This 20 Cent coin is referred to by the KM code KM# 48. The KM code is a unique reference number assigned to each coin.

Below are some other Identifying features, like which Mint the 20 Cent coin was made at as well as some other factors.

Weight: 5.7300g
Diameter: 22.25mm
Rim: Raised with no decoration on either side
Edge: Notched
Shape: Circular with notched

Below the 20 Cent coin values are shown on a grading scale, the higher on the scale the better condition the coin is in which makes it more valuable.