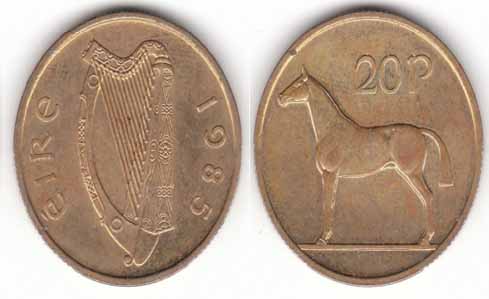 The 20 Pence 1985 coin was a third largest denomination in the Decimal 1969-2001-coin series of Ireland. This 20 Pence 1985 coin was produced in 1985 only to help vending machine operators and other coin-operated systems calibrate their machines. These coin 1985 20p coins were all supposed to be returned to the Dublin Mint after calibration but they were not and this has made them incredibly rare and incredibly valuable. It is unknown how many of these 20 pence 1985 coins were produced.

Unfortunately, no other year of 20 pence coin has anywhere near as much value as the 1985 20 pence coin. You can see exactly how much the other 20 pence coins are worth here.

If you want to understand how coin grading works and how to for instance find out the value of your Irish 20 pence 1985 coin, our Awesome Guide to Coin Grading In 3 Simple Steps article will help here.

The global standard for identifying coins is the KM Code. This 20 Pence coin is referred to by the KM code KM# Pn3. The KM code is a unique reference number assigned to each coin.
Below are some other Identifying features, like which Mint the 20 Pence coin was made at as well as some other factors. 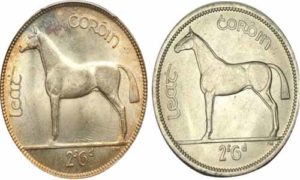 The Mechanical features of a coin are things like the size, weight, thickness and diameter for example. Looking at the mechanical features of a coin is the easiest way to tell if a coin is real or fake. When it comes to a valuable coin such as the 20 pence 1985 coin you should pay close attention to the mechanical details to ensure what you have or might have is genuine. Coins like the 20 pence 1985 are faked regularly.

Below the 20 Pence values are shown on a grading scale, the higher on the scale the better condition the coin is in and therefore the more valuable. Check out our Awesome Guide to Coin Grading In 3 Simple Steps article to learn more about coin grading. This coin is also featured on our Top 20 Valuable Irish Coins Article which you may be interested in.

This purpose of this website is to educate and entertain. All values shown are a guideline only and should not be used for any means of financial investment or speculation, as with all things values may fluctuate depending on demand and scarcity, we strongly advise that all information on this website is used as it was intended – for entertainment purposes. The information relating to coins is sourced from many places such as NGC, PCGS and The Irish Central Bank.