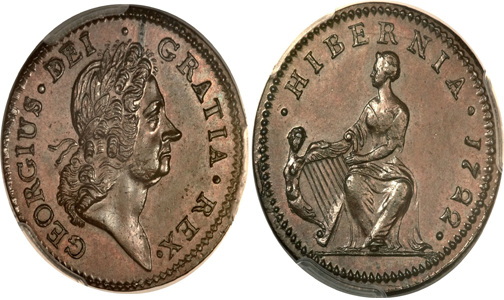 On this page, we will tell you all about the Hibernia Half Penny minted in the year 1722.

If this is not what you are looking for, you may be interested in the Hibernia halfpenny coin 1680-1682.

A little background about the Hibernia  Half Penny coin, The Hibernia Half Penny coin was part of the George I 1714-1727 coin series of Ireland-Hibernia. Produced in the year 1722. Unfortunately, it is unknown exactly how many were produced.

The standard globally for identifying coins is the KM Code. This Hibernia Half Penny coin is referred to by the KM code KM# 116. The KM code is a unique reference number assigned to each coin.

Below are some other Identifying features, like which Mint the Hibernia Half Penny coin was made at as well as some other factors.

Below the Half Penny coin values are shown on a grading scale, the higher on the scale the better condition the coin is in which makes it more valuable.