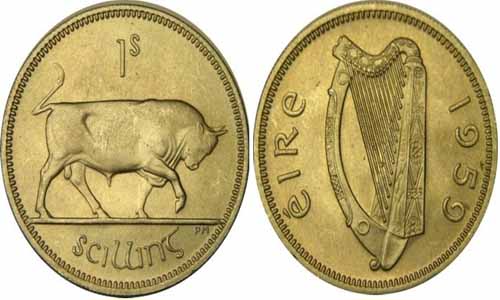 On this page, we will tell you all about the Irish Shilling coin minted between the years 1951-1968.

If this is not what you are looking for, you may be interested in the Shilling Coin 1928-1937.

A little background about the Irish Shilling Coin, The Shilling coin was part of the Pre Decimal 1939-1969 coin series of Ireland. Designed by Percy Metcalfe. Produced between the years 1951-1968 at the Royal Mint, Tower Hill Site, London mint. In total 27,000,000 of these coins were minted.

The standard globally for identifying coins is the KM Code. This Shilling coin is by referred to by the KM code KM# 14a. The KM code is a unique reference number assigned to each coin.
Below are some other Identifying features, like which Mint the Shilling coin was made at as well as some other factors.

The design of the Irish Shilling coin featured a Bull. This was chosen given the large importance animals had on farming and rural life in Ireland at the time and still, to some aspect do. Historically the number of cattle you owned in Ireland was also an indication of wealth.

This design was adapted from the original designs by Publio Morbiducci which were chosen for the coinage of the Irish free state in 1927. Many of the designs used in this coin series were reused in the Irish Decimal Coin series. Including the design for the Shilling coin.

Below the Irish Shilling coin values are shown on a grading scale, the higher on the scale the better condition the coin is in which makes it more valuable.

Check out our Awesome Guide to Coin Grading In 3 Simple Steps article to learn more about coin grading. If you really want to understand how to accurately value your coins to ensure you are getting the price when selling or buying coins it can really help. If you think we have missed anything get in touch and we will update the article.

This purpose of this website is to educate and entertain, All values shown are a guideline only and should not be used for any means of financial investment or speculation, as with all things values may fluctuate depending on demand and scarcity, we strongly advise that all information on this website is used as it was intended – for entertainment purposes. The information relating to coins is sourced from many places such as NGC, PCGS and The Irish Central Bank.
Pre Decimal 1939-1969
Shilling 1939-1942
Florin 1939-1943