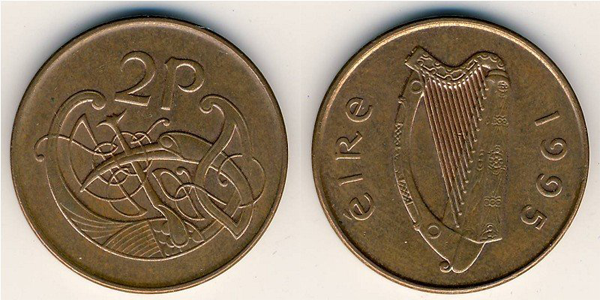 A little background about the Irish 2 Pence, The Irish 2 Pence was part of the Decimal 1969-2001 coin series of Ireland. Designed by Gabriel Hayes there is two versions of Irish 2 Pence produced between the years 1971 – 2000 at the Currency Centre Dublin mint. A total of 269,948,000 of this version of Irish 2 pence coin were minted.

Coin collecting can be full of complicated terms and phrases. If you are unsure what any of the terms on this page mean, check out our 180 Best Coin Collecting Terms Explained post. There we explain every term in an easy to understand way.

The standard globally for identifying coins is the KM Code. This Irish 2 Pence coin is identified by the KM code KM# 21a. The KM code is a unique reference number assigned to each coin.
Below are some other Identifying features, like which Mint the Irish 2 pence coin was made at as well as some other factors.

In coin collecting tems the “heads” of the coin is the Obverse and the “Tails” is the Reverse. So why is this important? What you might call the “heads” side of the coin is actually incorrect. The side with the Harp is actually the Obverse (front) of the coin – i know crazy! In a lot of coins from around the world this seems to happen. It’s quite common in Irish Coins also.
The design of theIrish 2 Pence coin was based on celtic style illustrations of Birds from the Book of Kells. An ancient Irish manuscript created by unknown monks in around the year 800. The Irish 2 Pence coin wasn’t alone in drawing inspiration from the Book of Kells. The Half Penny and Penny coins also had their design based on birds from the manuscript, below are both of these coins side by side. 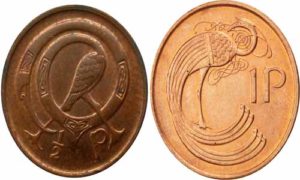 Below the Irish 2 Pence values are shown on a grading scale, the higher on the scale the better condition the coin is in and therefore the more valuable. Check out our Awesome Guide to Coin Grading In 3 Simple Steps article to learn more about coin grading. If you really want to understand how to accurately value your coins to ensure you are getting the price when selling or buying coins it can really help.

This purpose of this website is to education and entertain, All values shown are a guideline only and should not be used for any means of finacial investment or speculation, as with all things values may fluctuate depending on demand and scarcity, we strongly advise that all information on this website is used as it was inteeded – for entertianment purposes. The information relating to coins is sourced from many places such as NGC, PCGS and The Irish Central Bank.
Decimal 1969-2001
2 Pence 1971-1988
5 Pence 1969-1990